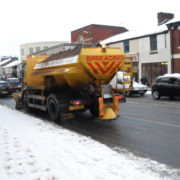 Other than helping our vehicles to operate in wintry conditions or stopping us from falling on our backsides during a particularly icy day, not many of us give too much thought to the tonnes of de-icing salt used on our roads and pavements every year. Where does it go after use? Who cares.

Well, a new study from the US suggests that perhaps we should care, after all. Published in the Proceedings of the National Academy of Sciences, the research shows that much of this unwanted salt is finding its way into American lakes, rivers and reservoirs, where it is playing havoc with salinity and alkalinity levels in the water and causing potential problems for residents in the local area.

Authors of the study examined data collected from streams in over 230 locations across the contiguous United States. Their findings showed that 37% of those sites showed significantly elevated levels of salt in the water, while a whopping 90% showed a dramatic increase in alkaline levels.

Of course, much of this increased salinity and alkalinity can be put down to agricultural residue, where runoff from heavy fertilisers and pesticides can find its way into these bodies of water and represents just another challenge of flood control. However, the increasing amounts of salt used to de-ice roads are also being held to account – and they’re a phenomenon that’s not just confined to the US, either.

A hike in salinity or alkalinity doesn’t sound too disastrous in itself, but changing the salt and pH levels of a natural habitat can cause severe problems for the flora and fauna which call it home. Furthermore, it could have a knock-on effect on human activity as well, hindering the filtration of contaminants in the water, corroding infrastructure and compromising drinking water supplies.

For example, the drinking water crisis in Flint, Michigan two years ago was caused when the town’s authorities switched their supply to a more saline source. The aging pipework in the town couldn’t cope with the higher salt concentration in the water, causing the pipes to corrode and lead to seep into the drinking water over time.

As always, the best way to clean up a lake or reservoir is to prevent its contamination in the first place. There are several ways in which authorities can reduce the run-off of de-icing salt into rivers and lakes, including substituting salt for brine or targeting only areas which really require the practice.

Furthermore, updating sewage drainage systems and other infrastructure with more durable materials will prevent the salt from damaging anything it comes into contact with, while constructing future roadways away from water sources will also serve to eliminate the problem.