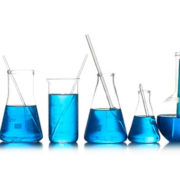 Effect – The severity of the reaction of a reactive material with its stimulus is referred to as the effect.  Effects are broken down into four categories.

Reactive chemicals are further classified into one of three reactivity designations based on the stimuli, sensitivity and effect.

Routine Reactives are materials that  if handled carefully by specifically trained personnel can be safely packaged, transported, and stored.  routine reactive chemicals must be in original containers and/or good integrity for shipping and closures must be securely fastened and in good condition.  Examples:  Water reactive materials, air reactive materials, and temperature sensitive materials.

Conditional Reactives are materials that when originally purchased were relatively safe to handle but due to age, storage conditions, or contamination may have become extremely dangerous.  The cause of the change in character of these materials is buildup of explosive peroxides, loss of inhibitors, or formation or explosive mixtures due to contamination.  Under worst conditions, these materials are extremely shock or heat sensitive.  Conditional reactives must be evaluated to determine if they meet specific conditions which make them unsafe and if so, must be handled by specially trained Reactive chemical personnel.  Examples:  Peroxide formers and monomers.

Special reactives are materials that under any condition are unsafe to handle routinely.  These materials must be handled by specially trained reactive chemical personnel, using specific reactive stabilization procedures and equipment.  Examples are Temperature Sensitive materials, high explosives, forbiddens.

Peroxide Formers:      Chemicals with the ability to form explosive peroxides such as Ethyl Ether or Tetrahydrofuran.

Peroxidation:  Peroxides form by the reaction of a peroxidizable compound with molecular oxygen through a process called auto-oxidation or peroxidation.

Peroxides are very unstable due to the O-O bond.  They are sensitive to heat, friction, impact, and light.  They can explode thus igniting the solvent they are in, causing a fireball.  Peroxides are less volatile than the solvent or chemical they are formed in and tend to concentrate in solution or on container threads.  Peroxides are most dangerous when dry, but available literature indicates that a percentage of 0.008 (80ppm) are dangerous.  This is why containers that have been previously opened and contain a small amount of the original solvent tend to cause the most problems.  Peroxide test strips indicate the level of hydrogen peroxide which reflects directly on the level of other types of peroxides present.  Hydroperoxides are believed to be the most dangerous and the overall hazard associated with a  given peroxide forming chemical structure generally decreases for its higher molecular weight  derivatives.

Some of the warning signs for possible peroxide formation are:

Age:  Shelf life is very important when assessing peroxide forming chemicals Opened containers of these chemicals are recommended to be disposed of within one month after first opening the cap and unopened containers are recommended to be disposed o within one year from when purchased.  The inhibitor or stabilizer can be lost over time, thus allowing peroxides to form.

Storage conditions – Be aware of container condition, any visible contamination, the type of container, and temperature fluctuations during storage.  Bulged, damaged, rusty, containers must be approached with extreme care.

Visible formation –Peroxides may be visible when concentrated and can be in the form of clouds, needles, a large mass suspended in the liquid, or powdery residue or crystals around the cap.

Stabilization – Stabilization of peroxides is achieved through special procedures developed.  They often involve a remote opening, and a chemical reduction or dilution with a suitable solvent. 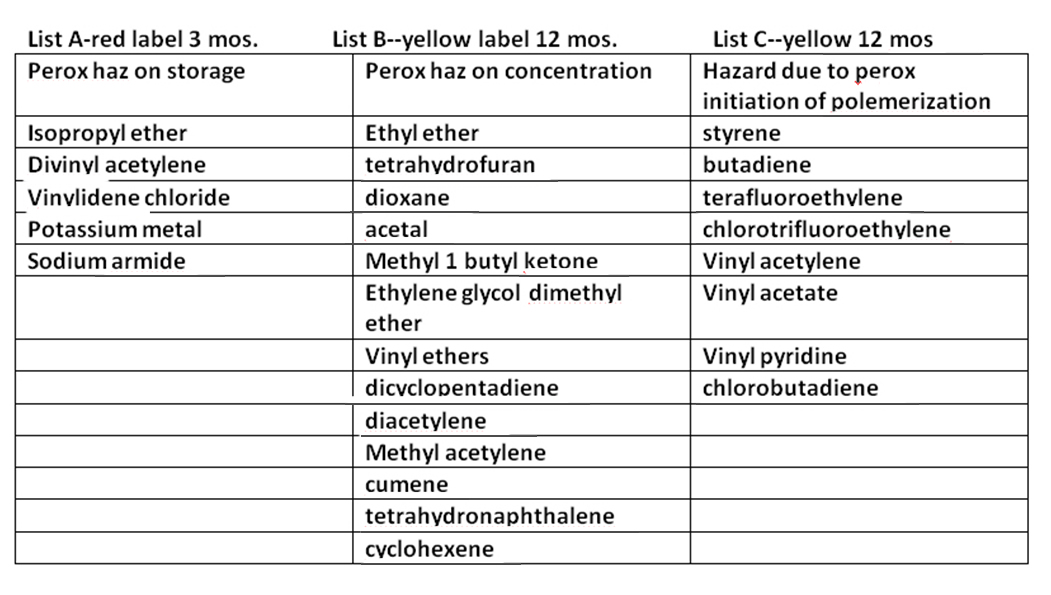 In the third installment, we will look at the fundamentals of Reactive Chemical Chemistry